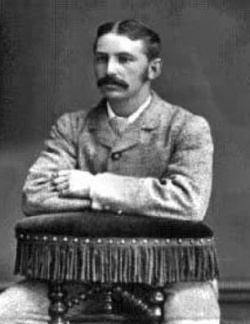 Direct links to lists of baptisms, marriages and burials for the d'Auvergne family can be found under Family Records opposite. If you want to search for records for a spelling variant of d'Auvergne, or for any other family name, just click below on the first letter of the family name you are interested in. This will open a new tab in your browser giving you a list of family names beginning with that letter, for which there are baptism records in our database of half a million church and public registry records.

You can also select marriages or burials. Select the name you want and when the list of records is displayed you can easily refine the search, choosing a single parish, given name(s) and/or start and end dates.

From August 2020 we have started adding records from non-Anglican churches, and this process will continue as more records, held by Jersey Archive, are digitised and indexed. Our database now includes buttons enabling a search within registers of Roman Catholic, Methodist and other non-conformist churches. These records will automatically appear within the results of any search made from this page.

If you can help with information about the d'Auvergne family, please contact editorial@jerripedia.org, using Jerripedia as the subject of your email. We are particularly interested in information which will help create further family trees, family histories and photographs 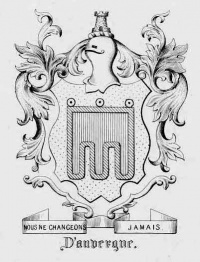 The surname probably has geographical origins in the French region of Auvergne, although there is considerable doubt as to whether the Jersey family has the roots claimed for it in the family of the Counts of Auvergne. This was a convenience used to establish Philip d'Auvergne as a claimant to the Duchy of Bouillon, but is far from accepted by genealogists.

The family of D'Auvergne may fairly claim, by the deeds of its members, and by its vast territorial possessions, to rank among the noblest and most distinguished of the French nobility, while its antiquity is carried back, by authentic documents, as far as about the year 800.

It appears, by researches entered into at the command of Godfroy, last reigning Duke of Bouillon, that a cadet of the house of Auvergne had emigrated after the crusade against the Albigenses, in the early part of the 13th century, and was traced to England, where he continued, under the auspices of Guilleaume (or Peter) des Roches, who became, by the favour of the Prince (afterwards King Henry III), and High Chancellor of England.

This cadet was called Robert, and surnamed De Clermont, but at his emigration had taken his family name of Auvergne, having married, contrary to his father's consent, (who was Robert, fourth Count of Auvergne,) a lady named Boutet, of an ancient patrician house of Aquitaine, and in whoso family Guilleaume des Roches had been brought up. By this marriage Robert d'Auvergne had a son, whom he called Thiebault, after his maternal great uncle, Thiebault, Count of Champagne; and this Thiebault obtained, through the influence of the Chancellor des Roches, a grant of lands in the island of Jersey, about the year 1232, on which he settled, and became the stock from which the Jersey family of that name lineally descend.

The grant in question was, from its first grantee, called La Thiebault, and tradition has handed down the name to a portion of it (in the parish of St Ouen) to this day ; although, as appears from the records of sales preserved in the Royal Court of the island, it was alienated towards the close of the 17th century by a member of the family, after having been in its possession upwards of 400 years. At this period one branch of the family settled in St Helier, while another remained in its ancestral parish of St Ouen.

These two versions of the same tree are from different sources, the second containing additional detail to the first

Tips for using these links

Click on any image to see a larger version. See the Jerripedia gravestone image collection page for more information about our gravestone photographs

The church record links above will open in a new tab in your browser and generate the most up-to-date list of each set of records from our database. These lists replace earlier Family page baptism lists, which were not regularly updated. They have the added advantage that they produce a chronological listing for the family name in all parishes, so you do not have to search through A-Z indexes, parish by parish.

We have included some important spelling variants on some family pages, but it may be worth searching for records for a different spelling variant. Think of searching for variants with or without a prefix, such as Le or De. To search for further variants, or for any other family name, just click on the appropriate link below for the first letter of the family name, and a new tab will open, giving you the option to choose baptism, marriage or burial records. You will then see a list of available names for that type of record and you can select any name from that list. That will display all records of the chosen type for that family name, and you can narrow the search by adding a given name, selecting a parish or setting start and end dates in the form you will see above. You can also change the family name, or search for a partial name if you are not certain of the spelling

Since August 2020 we have added several thousand new records from the registers of Roman Catholic, Methodist and other non-conformist churches. These will appear in date order within a general search of the records and are also individually searchable within the database search form