fter the stock of stamps held in the Island's Post Offices became exhausted during the latter end of 1940, letters had to be handed over the counter with cash in order to be franked by postmark. Though correspondence could only be despatched for inter-insular or local deliveries, this arrangement soon proved to be inconvenient and was presently obviated by the issue, under the orders of the Occupying Authority, of stamps designed and printed locally.

The designs thus approved bore the name of the island, the value of the stamp and the shield of arms of England as borne on the royal seals issued c1290 by Edward I to his Bailiff in each bailiwick.

The heraldically improper manner by which these arms became known as the arms of Guernsey and Jersey respectively was explained in an article entitled "The Leopards of England and the Channel Islands" published in our Bulletin for 1943. This true nature of the arms was fortunately unknown to the Germans, who otherwise might well have suppressed the leopards and compelled us to display their barbarous swastika instead.

In January 1941 I was asked by our Bailiff to design a 1d stamp for Jersey and told to base my design on one which had already been approved in Guernsey by the Germans, who would sanction no other.

Not being anxious to assist the Nazis in any way, I hesitated to accede to this request until it occurred to me that it afforded a good opportunity to insult our conquerors with impunity, hence the insertion of the four minute 'A's in the corners of the design which were intended to stand for “Ad Avernum, Adolphe Atrox": that is to say "To Hell with you, Atrocious Adolf".

This stamp was issued very appropriately on 1 April 1941; but only a small proportion was used for the purpose for which it was intended, the bulk being greedily purchased, with a view to ultimate gain, by a host of German and local collectors and speculators.

The ½d stamp did not appear until 20 January 1942, when the corner letters were changed to 'A' 'A' and 'B' 'B', signifying "Atrocious Adolf" and "Bloody Benito". In connection with these stamps I asked for no fee as a designer, nor was I offered one.

Both the 1d and ½d designs were printed under the most adverse conditions by the “Evening Post" of Jersey and the photographer responsible for their reproduction was J Higginbotham, a member of their staff. The 1d stamp was printed in carmine on various papers and the ½d in green, and though the difficulties encountered resulted inevitably in many blemishes and irregularities, these merely enhanced the value of the stamps in the eyes of ardent collectors and increased the acquisitive zest of the keener types of philatelist.

The next stamps to be issued were known as the Pictorials. These miniature works of art were designed by our member Edmund Blampied and engraved by Henri Cortot in Paris. They were printed by the French Government Printing Works at the Postes, Telegraphes et Telephones in Paris.

Further printings were as follows :-

The last two lots were printed on an inferior paper and the gum was thin and dull. The taste of the gum was not recorded.

A patriotic motif was introduced by Mr Blampied in his design for the 3d stamp, whereon the Royal cipher, GR, appears in the scroll-work in the base of the triangle which encloses the 3d. 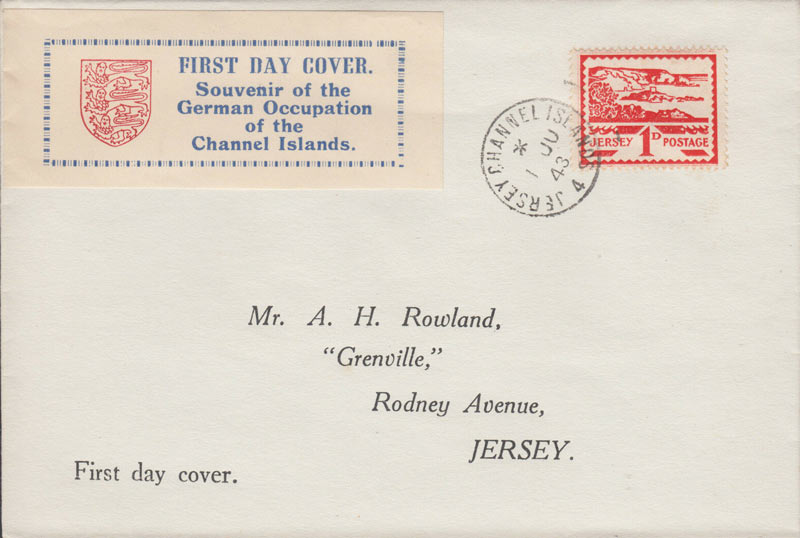 A mysterious first day cover from 1943. Why was the 'souvenir' sticker used? It is very rare to find an Occupation cover with this sticker, which would hardly have been the choice of islanders or their postal service, run by the island's government. Thoughts that the sticker may have been added after the war seemed to have been dispelled by finding a cover from 1941, with the recipient's address partly written over the sticker. Either these rare covers are elaborate forgeries, or the strange use of the wording 'souvenir of the German Occupation' remains to be explained

Closer examination of the 1941 cover strongly suggests that the sticker was added some time after the letter was posted and the obscured part of the recipient's name written on it. The writing on the sticker does not match well with the original on the envelope. These covers seems to have been created, somewhat clumsily, as rather unfortunate 'souvenirs' to sell to visitors
Retrieved from "https://www.theislandwiki.org/index.php/Jersey_postage_stamps_issued_during_the_German_Occupation"