A picture of Caesarean Nurseries proved something of a mystery as our Picture of the Week in 2012. The picture was printed in Royal Journeys - Victoria and Albert in the Channel Islands a 1904 book written by Jane Ashelford, as an illustration of activities on the land during the Victoria era.

The picture, with its original caption, was as follows:

"Caesarean Nurseries was a major establishment in St Saviour, open from at least the mid 19th Century until the beginning of the 20th century. The nursery was clearly an undertaking of considerable size, and the limited records which still exist suggest that it was renowned as a major supplier of tropical and sub-tropical plants to the rest of the British Isles. The owner for over 35 years, Charles Bernard Saunders, was recognised as an authority on these plants and also grew many of the large pears that in the Victorian era made Jersey specially famous for this fruit. He acquired the property and the adjoining Alphington House in 1865 from his brother Alfred, who had inherited it from their father Bernard, who appears to have founded the nursery some time before 1837. Charles Bernard's son, renowned 20th century historian Arthur Charles Saunders, sold the nursery, Alphington House and the adjacent Swiss Cottage in 1901 to Hermann Becker, who sold the houses seven years later to Francis John Bois. A reference has been found to

Charles Bernard Saunders being dead by 1899, so presumably his son ran them for a short time. It is not clear when the nurseries ceased to operate (although there is no doubt that Becker ran them for a time) or exactly what area was covered, but the land has now been returned to open fields. The only road in the area which runs in the same direction as the one shown in the bottom right corner of the drawing, passing the entrance pillars, is Les Ruettes, which is just to the south of Alphington House. Although it appears in a book describing the Channel Islands at the time of Queen Victoria's visit in 1846, the drawing could not have been made before 1894, when the Observatory tower, which shows clearly in the middle of the top of the picture, was erected. To the right of this tower is what appears to be the spire of St Thomas's Church. There is a reference in an 1840 guidebook to the island to large nurseries close to Government House, but it is not clear whether this is a reference to Caesarean Nurseries, which are some way distant from there."

It has since become clear that the picture was originally published in Jersey Illustrated, a 1906 trade directory written by E T Nicolle, with the accompanying article:

Jersey has long been noted as a centre of the fruit and flower growing industry, and amongst the businesses identified therewith a conspicuous place is occupied by the one which it is our pleasure to describe in this article. Mr H Becker, the proprietor, is a gentleman who has had exceptional experience of his profession, and who, prior to commencing operations on his own account, had the advantage of a thorough scientific training at one of the leading Colleges of Horticulture in Germany.

He has consequently been able to conduct each branch of his business on the most approved modern lines, and his success has been entirely what might be expected under the circumstances.

As a fruit grower and exporter he has built up a connection which extends to every part of the United Kingdom, as well as to many important centres on the continent, whilst his local trade, which embraces substantial wholesale and retail dealings in all kinds of fruit, flowers, cut blooms, table plants etc is probabloy the largest in Jersey.

For many years past Mr Becker has been a frequent and successful exhibitor at various horticultural shows, notably those held at Earl’s Court, London, and in 1892 he had the honour of presenting a basket of fruit to HRH the Duke of Connaught, at Government House, Portsmouth, where he received HRH’s personal thanks, which were afterwards supplemented by an autograph letter acknowledging the gift.

To enumerate the whole of the departments of flori- and frugiculture in which Mr Becker engages would take up considerably more space than is at present at our disposal. We may note, however, that he specially prides himself on his success as a pear grower, in which line his stock of named sorts numbers over 100. He also grows about 200 varieties of apples, together with many different kinds of peaches and grapes, nectarines, strawberries, tomatoes and other fruits in proportion.

Great attention is likewise given to the cultivation of roses, ferns, foliage plants, carnations, fruit, forest and ornamental trees, evergreen, flowering and deciduous shrubs, herbaceous plants, culinary herbs, tubers, narcissus, etc. The premises at 13 Beresford Street consist of a handsome double-fronted shop, arranged and appointed in the best syle, and in every way suited to the purposes of a high class floral business. Here choice fruits in season, early vegetables, and the whole round of table plants and horticultural sundries may always be obtained on distinctly advantageous terms.

Cut flowers, buttonholes, sprays, bouquets, wreaths, crosses, floral decorations and the like are also supplied, delivery being made to any quarter of the island and abroad with the utmost despatch, telephonic communication existing between the shop and the nurseries. 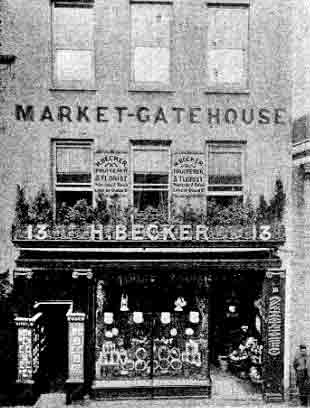 Two extensive ranges of nurseries are maintained, viz the Imperial Nurseries, St Mark’s Road, situated a short distance from the town, and the Caesarean Nurseries, St Saviour’s Road, and Five Oaks, one and a half miles away.

The first mentioned is principally utilised for hothouse fruit and flower growing, the major protion of the ground available being under glass.

The Caesarean Nurseries were originally established in 1816 by Mr C B Saunders, well known as one of the pioneers of the Jersey fruit and flower trade. They were acquired by Mr Becker in 1890 and have since been entirely remodelled and reorganised.

The ground area now taken up amounts to many acres, variously laid out as fruit and rose quarters, shrubberies, etc.

A staff of experienced hands is employed at each place under the personal direction of the proprietor, and as we have already indicated, the methods of cultivation adopted are based on the most advanced scientific principles, evidently yielding results of a distinctly satisfactory nature.

The finest of the produce of the island passes through Mr Becker’s hands for his export trade, and the most enormous of the celebrated Jersey pear are never offered for sale in the English markets, but are annually forwarded direct to the addresses of clients able to afford themselves the luxury of procuring the cream of the island’s produce direct from the producer.

In addition to exporting immense quantities of fruit, flowers and young trees to the English, Irish and Scotch markets, Mr Becker does a considerable business as a landscape and general gardener, having carried out many important contracts for work of this character both in the island and further afield. He also contracts for the planting of orchards and shrubberies, and the complete furnishing of vineries, rosaries and conservatories, in each of which departments he has had wide experience.

We may add by way of conclusion that Mr Becker is a Fellow of the Royal Horticultural Society and enjoys the respect and esteem of a large circle of business friends, as well as of the leading experts in his profession.

There remains a certain amount of confusion about the exact location of the nursery and the timing of Hermann Becker's acquisition. There seems little doubt that by the end of the 19th century the nursery was in Becker's ownership and covered a substantial area stretching from Grands Vaux towards Five Oaks. His acquisition of the neighbouring Alphington House was clearly a separate transaction because the Jersey Illustrated article makes it clear that by 1901 he had already owned the nursery for eleven years.

The reference to the nursery being at St Saviour's Hill and Five Oaks suggests that there were two separate parts, one of which was probably that referred to in the 1840 guidebook.

Perhaps the greatest mystery of all, which will require further research, is why such a major business as this disappeared without trace, and at what time the area covered by the nursery, divided into so many individual sections, with glasshouses and other buildings, reverted to being open fields.