Once we leave Verclut and St Catherine's Breakwater on our round island journey the nature of the coast changes. There will be no more wide sweeping sandy bays until we reach the west coast; instead our journey takes us along what is essentially a cliff coast, with the occasional isolated coves and bays. This is because Jersey is essentially the remnants of the southern slopes of some ancient geological feature. 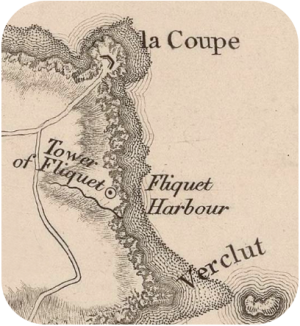 The area behind the breakwater is known as La Fosse, and beyond that a sand bank called La Lague, which is described as an area of black mud exposed in the sand at low tide. 50,000 years ago this was cold, dry grassland over which mammoth roamed and, more recently, say 10,000 years ago, just before Jersey was cut off from the French mainland by rising sea-levels, there would have been a river running between what is now the island and Normandy, to the north-west. This black mud is the peat from which the secrets of the island’s ice age past can be unlocked.

Beyond this the first cove opens up – Fliquet, ‘the place of the limpets’, which on the map prepared for Philippe d'Auvergne, Prince de Bouillon, in 1799, is described as ‘Fliquet harbour for boats’. This was a base for fishermen; although, as the 1872 fisheries survey noted: ‘At Fliquet there are about 20 fishermen, most of whom are farmers and work at their farms in the winter’.

Their small open boats would have been drawn up on the beach protected from the prevailing westerly winds. It was also here that Clement and John Richardson, of Le Villot, built a number of cutters in the 1840s and 1850s. In the 1851 census John described himself as a farmer, but his eldest son, also John, was a seaman, and two other sons, Philip and Thomas, were shipwrights, as was his next-door neighbour Charles Amy.

In 1846 John built himself a 14-ton cutter, which was called Yacht. Between 1862 and 1928 she served as one of the pilot boats operating out of Town, but her claim to fame came in 1931 when she was bought by the writer Hilaire Belloc, who sailed her all around the south coast and over the Channel to France. By then she had been renamed Jersey. She was finally removed from Lloyd’s Register of Yachts in December 1956, when she was noted as lying derelict at Gravesend. Not a bad innings for a 108-year-old wooden boat.

In November 1867 an incident starting out in Fliquet made the UK newspapers from Cornwall to the North of Scotland. On Monday 28 October 1867 three lads ran away from the Royal Naval Training School at Gorey, because they were tired of the restrictions and discipline they were forced to endure. They each stole a revolver from the school’s armoury and made their way to Fliquet, where they stole a boat with the idea of sailing over to Normandy.

However, they had not taken the weather into account and, as the conditions worsened, the lads were driven ashore on Les Ecréhous, where they took shelter in one of the fishermen’s huts. They spent the next two days there without any food. Luckily they were spotted by some fishermen who were returning to Gorey. The men left the boys what little food they had left, before continuing on their way. Once in port they reported the boys whereabouts to the Naval School authorities and the next day, the Fishery protection cutter HMS Jersey was sent to pick them up.

Fliquet Tower before its top was cut off

Next to the slip is Fliquet Tower. Along with St Catherine and Archirondel, Fliquet was part of Conway’s scheme to guard the east coast, which, because of its proximity to France, was always considered susceptible to attack. When it was first built in the early 1780s it was a typical Jersey design round tower, with four projecting machicolations.

Its armament, which did not change throughout the course of its service, consisted of one 18-pounder carronade mounted on the roof. Close by the tower, and associated with it, was a battery with one 24-pounder cannon. Together, in 1797, they were manned by a sergeant, a corporal and ten soldiers of the Invalids, and in 1803 by a sergeant, a corporal and nine soldiers from the 3rd Royal Garrison Battalion.

Records show that repairs to the tower were carried out in 1812, 1833 and 1835. At some stage in the 19th century the top floor was removed straight through the line of the musket loops, leaving the ‘new’ top of the tower with an ornamental crenelated look.

The War Department tried to get rid of it in 1913, but received no bids. During the Occupation it was used by the Germans, who partly capped the roof with concrete.

Like other towers, Fliquet has a white painted patch on its seaward side to serve as a navigation mark. The tower is sometimes known as Telegraph Tower, because in late 1859 the Submarine Telegraph Company laid their cable from here to Pirou, on the opposite coast of Normandy.

The landline through to St Helier was laid in January 1860, and by the end of the month messages could be sent to France. The underwater cable was always in danger of being damaged by dredging, so occasional warnings were printed in the newspaper warning ‘Fishermen, Oyster dredgers and Mariners’ not to anchor or dredge in the area.

Beyond the tower lies a rock called La Dolée, supposedly named because it looks like the shavings produced by an adze, and finally the small, secluded beach beneath what has been described as one of the most unspoilt and beautiful coastal headlands in Jersey - La Coupe, which means the top of a hill or a summit.

In 1778 a battery and a guardhouse was established on top of La Coupe. Two 12-pounder cannon were positioned facing out to sea on a flat platform behind a low parapet, to provide some cover. The guardhouse was used to store gunpowder and shot, as well as to accommodate the militia gun crews when they were on duty. The low seaward facing wall can still be seen. More obvious, however, is the small tower used by the Royal Navy as a lookout post during the Napoleonic Wars.

La Coupe marks a turning point in our journey around the coast; from here the coast turns westwards and the island presents its wild northern cliffs to the sea.