Berry House, Val Plaisant, the original home of the school 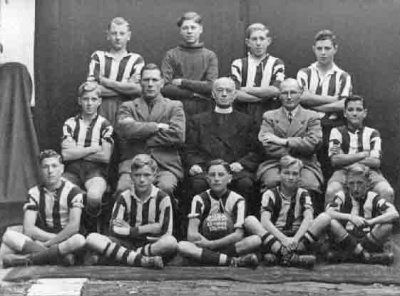 De La Salle College takes its name from St John Baptist de la Salle (1651–1719), who founded the Brothers' Order in the time of Louis XIV. Today the Order has establishments in over 80 countries.

A few Brothers settled in Jersey at the time of the French Revolution and remained in the Island for several years. Then from 1866 to 1896 a school of up to 300 pupils run by the Brothers' flourished in St Thomas' Parish. The Brothers left the Island in 1896 but were invited to return in 1917 to found another school.

The school was established at Berry House next to St Thomas' Church in Saint Helier and was initially known as St Aloysius College. Within a year the main site of the school was moved to a property known as The Beeches on Wellington Hill in the parish of Saint Saviour. It was at this point that the name De La Salle College was first given to the school.

Under the direction of Brother Edward, the first and longest serving Headmaster (33 years), the school grew significantly in numbers. On opening day, 1 October 1917, there were just a dozen pupils. By the start of the following year the number had increased to 57 and it reached 100 by 1921.

For the first time in 1933 the school topped the 200 mark and a school holiday was given to mark the occasion.

The transfer of the school from the French Province in Quimper to the Province of London in 1948 marked a distinct change in its fortunes. By 1949 no fewer than 470 pupils were attending the school. New buildings were planned and erected in the mid-1950s. Many past pupils testify to the tremendous spirit in the school even at times when it lacked buildings and facilities. Without this spirit it is difficult to appreciate how the school could have survived.

Two significant factors have helped ensure that the school has a bright future well into the next century. The first was the introduction of the Covenant Scheme. Begun in the mid-1960s, it led initially to the opening of the swimming pool and gymnasium and then to a period of rapid expansion. The 6th Form Block, Science Building, CDT, Art Rooms and the Computer Room were completed in quick succession. Secondly, in 1976 the States agreed to provide the school with financial assistance in the form of a capitation grant for running costs. 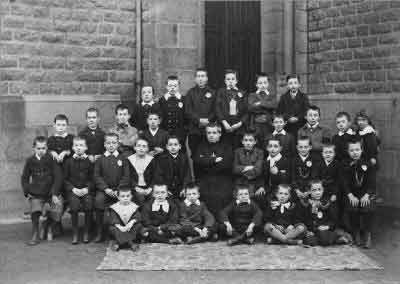 A group of early pupils outside St Thomas's Church 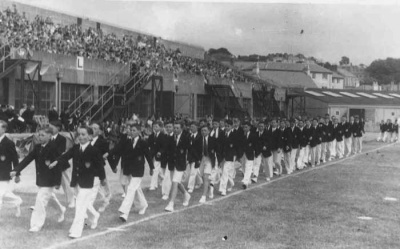 Sports Day at Springfield in 1954

The 6th Form Block, Science Labs and IT facilities, Art Rooms, CDT workshops and Drawing office, a new Infant School, six new classrooms for secondary and a new Junior School were all completed thanks to the help provided through the Covenant Scheme.

A “new age” began in the late 1990s when negotiations began with the States of Jersey for capital funding and the building of eight new classrooms and a Library and Resources area began in January 2003.

Though there is no longer a Brothers’ Community in Jersey, the school retains close links with the Brothers who are Trustees of the College. 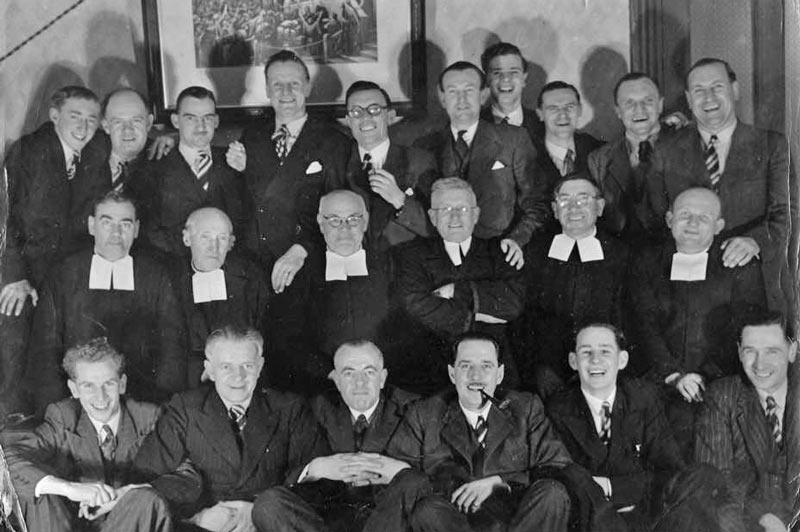 Annual dinner photograph of the Beeches Old Boys Association in 1949
Retrieved from "https://theislandwiki.org/index.php/De_La_Salle_College"