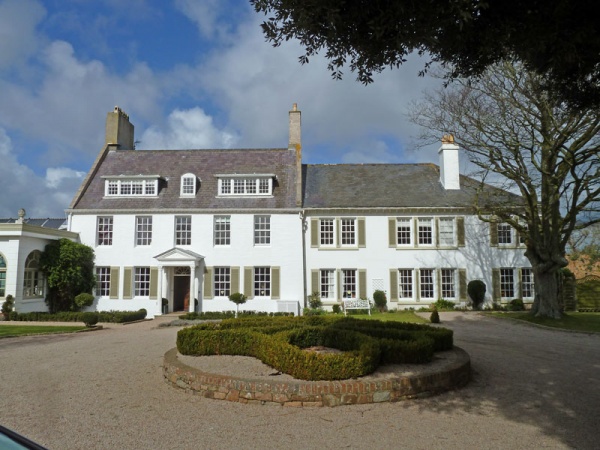 Families associated with the property

There is a 1627 record of a bail à fin d'Héritage between Jeanne Hamptonne daughter of Nichollas of the first party and Simon Le Sebirell of the second party, recording the lease in perpetuity of a piece of land in St Peter, Fief du Roi for the sum of 1 comblé cabot of wheat of rente.

Jersey Heritage also holds two copies of a bail à fin d'Héritage between Symon Le Sebriel and Raulin Hamptonne recording the lease in perpetuity from of two small côtils in St Peter, Fief du Roi for the sum of 4 cabots of wheat, 1 cabot of mixed grain and 2 chickens of rente.

An imposing house of early 18th century origins, with some older fabric, retaining historic details of different periods - including fine stonework and a decorated 19th century gutter. On site of older property and reusing earlier stonework.

The original house was built by a branch of the Hamptonne family Hamptonne, St Lawrence in the late 16th century. John McCormack's Channel Island Houses records an oak upper kings post roof and notes reused stonework from a medieval fireplace in the basement and chamfered windows on the rear wall.

The lintel above the front door is dated 1722, with a shield enclosing the Hamptonne family arms. The former stables include a 1736 datestone, and the house is virtually the same plan as the St Aubin's Hotel Apartments, built circa 1737).

The house was altered in the later 19th century and 20th century. The cottage/store to the rear is of early-mid 19th century origins.

Hamptonne stands on a site where a house was built by the Hamptonne family in about 1550. A lintel above the front door of the present property is dated 1722, but it may have been brought to the property from elsewhere, because the author suggests that the house is not this old.

However, it cannot be much younger because in 1759 it was sold to Philippe Le Couteur, and it was inherited by his great-granddaughter, who married Philippe Le Sueur. Their son inherited the property and sold it.