Some of the postcards of Jersey views which are most popular with collectors and include some of the best images available of the island in the early 20th century are the LL series.

LL postcards were produced for a wide variety of locations, from the USA to England and across France, as well as over 200 of Jersey scenes. For many years they were assumed to be the work of Louis Levy, but research has shown that nobody of that name was ever associated with the company. The 'Louis Levy error' was debunked as long ago as 1991, but still today thousands of LL postcards can be found online, either for sale or illustrating websites, which are attributed to Louis Levy. A Google search for LL or Louis Levy will yield thousands of results associating the two, particularly on online auction site Ebay.

The Channel Island Specialist Society, which includes among its membership some of the most enthusiastic collectors of Jersey postcards, has produced a factsheet explaining what lies behind the description 'LL'.

"The essential facts about the company responsible for the vast number of LL postcards may be familiar to some people, but they are worth stating, not least because of what might be termed the 'Louis Levy error' remains ingrained among many collectors.

"In the book Picture Postcards and their Publishers (Anthony Byatt, 1978) it is stated that the thousands of French postcards and hundreds of English cards bearing the initials LL were produced by Louis Levy and Sons, who established an office at Gamages Buildings, 118-122 Holborn, London in about 1905 with Max Alexander as Levy's agent.

"However, according to the research that has been undertaken by Geoff Ashton and other members of the LL Collectors' Circle, no person named Louis Levy was ever associated with the Levy firm. This error, which seems almost intractable, may have arisen through confusion with an American called Louis Levy, who was involved in early photography and, with his brother Max, developed various important photographic processes. 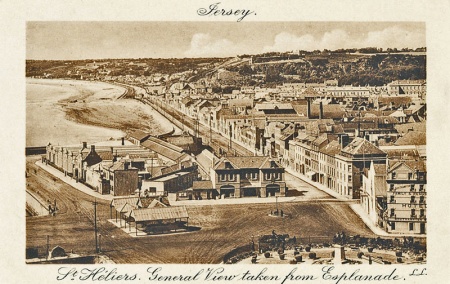 "The research into the true facts about Levy Fils et Cie has established that the initials LL that appear on the front of these postcards in reality stood for (Moyse) Leon and his son-in-law (Isaac) Levy - always known as Georges. Moyse Leon and Isaac Levy began as assistants within the Parisian photographic studio Ferrier-Souilier. They established their own photographic studio in 1862 and sold prints on albumen paper, mainly stereoscopic prints, signed 'LL'. Thus the letters LL were the initial letters of their surnames, Leon and Levy. The Leon and Levy firm took part in the 1867 Universal Exhibition where they wonk the Emperoro's Gold Medal.

"In 1872 Leon left and the Leon et Levy studio became J Levy et Cie, Georges Levy being the only company director from this date, and the company retained the use of the original LL imprint. In 1895, when Levy's two sons Abraham Lucien Levy and Gaspard Ernest Levy, took over the firm, the company was renamed as Levy Fils et Cie. The company's output grew and the photographs continued to have the LL signature. This photogrpahic firm had an intenes period of activity, producing individually sold prints, albums relating to tours, as well as postcards.

"It has been suggested that Georges Levy's son Lucien was the firm's photographer, but this theory was based on an incorrect assumption that the initials LL represent his initials. This is no more valid than the belief that the initials stood for Louis Levy.

"The company filed the brand LL in 1901, which served to avoid confusion with the signature L & L from the studio Lehnert and Landrock when that was created in Tunisia in 1904.

"Georges Levy died in 1913 and in about 1917 Levy Fils et Cie was bought by the printer Emile Crete who also acquired the formerly successful but by then struggling firm of Neurdein Freres, and by 1920 Crete's new company was known as Levy and Neurdein Reunis. In 1932 it passed into the hands of the Strasbourg-based photographic agency Compangnie Alsacienne des Arts Photomecaniques, which in 1967 was acquired by the still extant Roger-Viollet Photographic Agency."

Gallery of LL postcards of Jersey

Click on any image to see the full-size postcard. The cards are in numerical order but landscape format cards are shown first, with vertical format cards below